A Majorana fermion is a special type of fundamental particle which is its own antiparticle. The possible realization of these exotic Majorana fermions as quasiparticle excitations in condensed matter physics has created much excitement. Most recent studies have focused on Majorana bound states which can serve as topological qubits. More generally, akin to elementary particles, Majorana fermions can propagate and display linear dispersion. These excitations have not yet been directly observed, and can also be used for quantum information processing. This talk is focused on our recent work in realizing dispersing Majorana modes. I will describe the conditions under which such states can be realized in condensed matter systems and what their signatures are. Finally, I will describe our scanning tunneling experiments of domain walls in the superconductor FeSe0.45Te0.55, which might potentially be first realization of dispersing Majorana states in 1D. 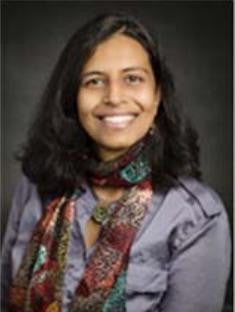 Professor Madhavan received her bachelor's degree in metallurgical engineering in 1991 from the Indian Institute of Technology, Chennai, and a master of technology degree in solid state materials in 1993 from the Indian Institute of Technology, New Delhi. She obtained her Ph.D. from Boston University in 2000. She held a postdoctoral appointment at the University of California, Berkeley from 1999 to 2002, before joining the physics faculty at Boston College in 2002. She joined the faculty at Illinois in 2014 as a Full Professor. She has received the Career award and is an APS fellow.