Polymers solvated by imidazolium salts exhibit better thermal stability and lower glass-transition temperature. Understanding the interactions and solvation between polymer and ionic liquid is important for designing soft and mechanically strong membranes with high ionic conductivity and thermal stability for their applications in electrochemical devices. In this talk, I will present our recent results about the structural and dynamic relations of poly(methyl methacrylate) (PMMA)-grafted nanoparticles in imidazolium-based ionic liquids. I will show how dynamics of HMIM+ cations of 1-hexyl-3-methylimidazolium bis(trifluormethylsulfonyl)imide (HMIM-TFSI) is affected with the addition of PMMA-grafted Fe3O4 nanoparticles. We found that translational ionic diffusion of ionic liquid slowed down as a result of the good mixing and coupling of ionic liquid with the PMMA grafted chains. With the aggregated system, diffusion was found to be similar in bulk due to the phase separation between ionic liquid and particles. These dynamic measurements combined with conductivity results suggest that grafted particle dispersion and conductivity increases with the solvation and with the interactions between high graft density particles and TFSI. In conclusion, both solvation and solubility of grafted nanoparticles in ionic liquid/solvent mixtures determine the mobility of ions in well-defined particle dispersions. 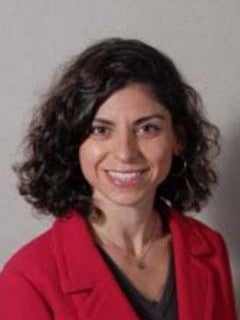 Dr. Pinar Akcora received her Ph.D. in Chemical Engineering at the University of Maryland-College Park in 2005. She completed her post-doctoral work at Columbia University between 2005-2008. She joined University of Missouri-Columbia, Chemical Engineering as an assistant professor in 2008 and has moved to Stevens in 2010. She is the recipient of the 2010 NSF-CAREER award and has received several grants from NSF-DMR, -CMMI and ACS PRF. She currently serves as the coordinator of the Nanotechnology Graduate Program at Stevens.