Symmetry lies at the heart of the laws of nature and determines material properties at the fundamental level. We all know that breaking the inversion symmetry is directly mapped into materials properties by inducing a plethora of effects such as dielectric polarisation along with pyro- and ferroelectricity, piezoelectricity, bulk photovoltaic effect, electro-optic effect and second harmonic generation, etc. Material symmetry in chiefly determined by its pristine crystallographic structure, but external stimuli can also lower symmetry or even break the inversion symmetry. A well-known example of such stimulus is the strain gradient that breaks the inversion and induces electric polarisation in any material, including centrosymmetric materials, by the so-called flexo-electric effect. In this talk, I will focus on inducing the effects associated with inversion symmetry breaking in native centrosymmetric materials. I will show that strain gradients not only induce electric polarisation but also convert any semiconductor in a photovoltaic/photogalvanic generator by the flexo-photovoltaic effect. Similarly, built-in electrical fields within ubiquitous Schottky contacts break the symmetry at the interface inducing piezo- and pyroelectricity with completely different tweaking parameters than classical piezo- and pyroelectrics. I will also show that ferroelectric polarisation breaks locally the symmetry in contiguous materials, especially magnetic oxides, inducing/enhancing effects such as topological Hall effect. 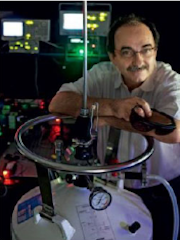 Professor Marin Alexe has been appointed as Chair of Functional Materials at the University of Warwick after spending about 18 years at the Max Planck Institute of Microstructure Physics-Halle (1996-2013). He has received the PhD degree from the Institute of Atomic Physics Bucharest in 1995. His research interest is physics and engineering of ferroelectrics, complex oxide thin films for information technology and integration of functional materials for oxide electronics. He has published more than 300 papers and 2 books and has an h-index of 58. In the last five years he has given more than 30 invited talks and lectures at international meeting and conferences. He was recently awarded Wolfson Research Merit and Theo Murphy “Blue Sky” Awards of the Royal Society as well as Alexander von Humboldt research Award.