100 years since the discovery of ferroelectricity, this phenomenon still remains a center of intense research. The electrically switchable polarization, which is strongly coupled to the physical properties of ferroelectrics, determines the multifunctional nature of their responses to the external stimuli and underpins our ability to address a range of technological applications related to future computing. Over the last decade there has been a remarkable expansion of the already vast family of ferroelectrics due to emergence of polar-ordered phases in two-dimensional variants of traditionally non-ferroelectric materials. In the first part of my lecture, I will discuss a nanoscale insight into the electronic and electromechanical properties of one of the most exciting groups of emerging ferroelectrics - HfO2 family of simple oxides. Visualization of time-voltage dependent domain structure evolution reveals the underlying physical mechanisms of unconventional ferroelectric behavior of these materials. In the second part, I will discuss emergence of a polar phase in 2D transition metal dichalcogenides (TMD), and challenges associated with demonstration of their polar behavior and a possibility of tuning their electronic properties via control of polarization. Finally, I will discuss the emerging electronic phenomena in the hybrid 2D structures comprised of 2D TMD and ferroelectric films. Incorporation of these materials into the integrated structures provides a novel technological platform for ultra-scaled devices with functional performance enhanced beyond the current Si-based electronics. 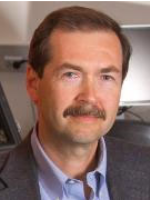 Dr. Alexei Gruverman is a Charles Bessey Professor at the Department of Physics and Astronomy, University of Nebraska-Lincoln. He serves as a research coordinator of the interdisciplinary research group at the Materials Research Science and Engineering Center at UNL and was a theme leader of the Center for Nanoferroic Devices sponsored by Semiconductor Research Corporation. His research interests are in the field of scanning probe microscopy of functional materials, electronic phenomena in ferroics, and information storage technologies. Dr. Gruverman has a diverse set of expertise acquired in a leading semiconducting company and academic research environment in prominent universities in USA, Europe and Asia. Prior to joining UNL in 2007, he held research scientist positions at the Joint Research Center for Atom Technology in Tsukuba, Japan, and at Sony Corporation, Yokohama, Japan, and research professorship position at the North Carolina State University, USA. He has co-authored over 230 papers in peer-reviewed international journals (WoS h-index 63) including Science, Nature Materials and Physical Review Letters, which were cited more than 14,000 times, a number of book chapters and review articles and has edited three books and several special journal issues on ferroelectricity. He is a recipient of the 2004 Ikeda Foundation Award, ISIF 2010 Outstanding Achievement Award, IEEE 2017 Ferroelectrics Recognition Award and Humboldt Research Award. He is a Fellow of the American Physical Society and an International fellow of the Japan Society of Applied Physics. Among his most important scientific accomplishments is the development of Piezoresponse Force Microscopy, manipulation of ferroelectric domains at the nanoscale, development of an approach for fast switching dynamics in ferroelectric capacitors, demonstration of the tunneling electroresistance effect in ferroelectrics, and nanoscale studies of electromechanical behavior of biological systems.