Biomimetic Macromolecules at the Materials-Biology Interface

The overarching theme of our research program is “Biomimetic Macromolecules at the Materials-Biology Interface”, which encompasses nature-inspired molecular-level design and synthesis of polymeric materials toward unprecedented control of structure and biological activity. The central aim of our work is to understand how tuning the chemical structure and physical properties of polymer chain molecules can influence their interactions with living systems such as bacterial or mammalian cells. Specific projects include development of anti-microbial materials and coatings capable of depolymerization on-demand, photosensitive antibacterials, and controlled degradation of polymerized drugs for local, sustained release. One more recently developed thrust area involving improvements to PPE efficacy to help control the COVID pandemic is ongoing. 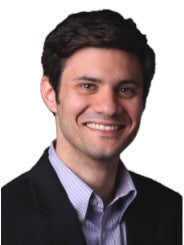 Ed Palermo began his studies in polymer science as a high school student under Professor Miriam Rafailovich at SUNY Stony Brook. After completing a bachelor's degree in Mechanical Engineering at Cornell in 2006, he moved to The University of Michigan and earned a Ph.D. in Macromolecular Science & Engineering, under the mentorship of Kenichi Kuroda, in 2011. Ed was also an NSF/JSPS visiting scholar at Nagoya University under Professor Masami Kamigaito. Following a postdoc with Anne McNeil in Chemistry at Michigan, Ed joined the faculty at RPI in 2014 and was promoted to the rank of Associate Professor with tenure in 2020. He is a recipient of multiple awards including the ACS PMSE Young Investigator Award (2018), NSF CAREER Award, DMR-Biomaterials (2017), ACS PRF Doctoral New Investigator Award (2017), and the 3M  Non-Tenured Faculty Award (2016-2018).