Spin-orbit torque (SOT) is a relativistic quantum effect that allows for energy-efficient manipulation of magnetization by electric current. Several technologies utilizing spin torques such as non-volatile memory (STT-MRAM) and hard disk drives with microwave assisted magnetic recording have recently been commercialized. Spin torque devices are also under active consideration for neuromorphic computing applications. In this talk, I will discuss recent discoveries of SOTs arising from spin-orbit scattering in ferromagnetic conductors and will show how these novel SOTs can be used to improve energy efficiency of spintronic devices. 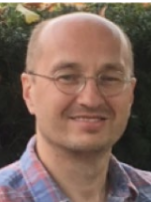 Ilya Krivorotov is a Professor of Physics at the University of California, Irvine. The focus of his research is physical phenomena resulting from the interactions between magnetic, electronic and lattice degrees of freedom in solids and their device applications. Examples of such research include spin currents and spin torques in ferromagnetic nanostructures, spin torque memory technologies (STT-MRAM and SOT-MRAM), spin torque oscillators, spin wave logic devices, magneto-electric effect in nanostructures and proximity effect in ferromagnet/superconductor systems. He earned his Ph.D. in physics from the University of Minnesota in 2002 and was a postdoctoral associate at Cornell University before joining UC Irvine faculty in 2005. He is a Fellow of the American Physics Society, a recipient of the NSF CAREER Award and a recipient of the IEEE Magnetics Society’s Mid Career Award.