Over the past decade, advances in machine learning have led to the creation of new approximate density functionals. I will review this area, with an emphasis on very recent developments. How do such functionals compare to those of human design? What are their advantages and their limitations? For example, can they work for strongly correlated systems? I will consider both the exchange-correlation energy used in Kohn-Sham DFT and the non-interacting kinetic energy functional, needed to bypass the KS equations. 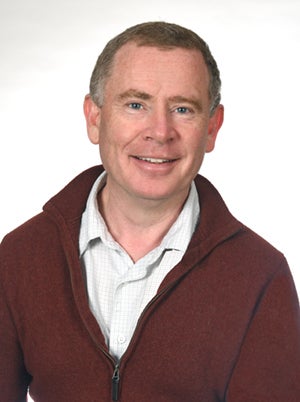 Kieron Burke is a professor in both the chemistry and physics departments at UC Irvine.  His research focuses on developing a theory of quantum mechanics called density functional theory. Density functional theory is a way of solving the equations of quantum mechanics for the electrons in any substance. Because DFT equations can be solved relatively quickly on modern computers, DFT has become a very popular tool in many branches of science, especially chemistry and materials science.

Prof Burke works on developing all aspects of DFT: formalism, extensions to new areas, new approximations, and simplifications. His work is heavily used in materials science, chemistry, matter under extreme conditions (such as planetary interiors or fusion reactors), magnetic materials, molecular electronics, and so on. He has given talks in theoretical chemistry, condensed matter physics, applied mathematics, computer science, and even organic chemistry.

Prof Burke believes that the most impactful advance in 20th century physics was the development of quantum mechanics, without which we cannot understand chemistry and materials. He also believes that there are few problems in theoretical science whose solution has more immediate impact than the improvement of DFT. The more accurate, reliable, and widespread DFT calculations become, the sooner we will have novel materials and drugs, and the more we will understand both our own planet and others.

Kieron Burke is a Distinguished Professor of UC Irvine.  He is also a fellow of the American Physical Society, the British Royal Society for Chemistry, and the American Association for the Advancement of Science, and a member of the International Academy of Quantum Molecular Sciences.  He is known around the world for his many educational and outreach activities.  According to Google scholar, his work has been cited almost 200,000 times.