Pyroelectric infra-red (PIR) sensors have a number of advantages over other IR sensors, including room-temperature operation, wide wavelength sensitivity and low cost, leading to their use in many applications, including intruder alarms, footfall counting, automatic light switches, gas analysis, fire/flame detection and thermal imaging. PIR’s had a market of ca US$50 million in 2020, expected to reach US$68 million by 2025, or about 10% of the total infrared detector market. All polar dielectrics exhibit the pyroelectric effect, so there is a wide range of materials potentially available for use in PIRs. Traditionally, materials scientists employ a range of “figures-of-merit” (FOM) to enable them to choose the best materials to use for a given application. These FoM, their application to the most promising pyroelectric materials currently available and their likely utility, will be reviewed in the light of the physics of different types of PIR. Some PIR applications will be reviewed, including the use of pyroelectric arrays for retail footfall counting and thermal imaging. Finally, a new PIR application to wildfire detection will be discussed. Wildfires regularly cause catastrophic damage world-wide, accounting for ~20% of global carbon emissions. The problem is being exacerbated by global climate-change, with unusually severe fires claiming hundreds of lives and causing economic damage worth US $Bn's. Many of the most damaging fires are sparked-off by power-line failure in remote, difficult-to-access terrain. Early intervention is key to effective damage control. A new low-cost solution to early fire detection is described based on the use PIRs combined with non-imaging radiation collectors (NIRCs). Early results of fire detection demonstrations will be presented. 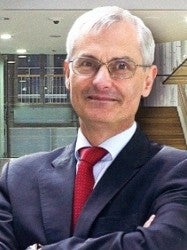 Professor Roger W. Whatmore graduated with his PhD from Cambridge University (1977) & spent 18 years working with Plessey / GEC Marconi laboratories at Caswell (UK) on the applications of ferroelectric materials. In 1993 he was awarded GEC’s Nelson Gold Medal and led the team that won the Prince-of-Wales’ Award for Innovation for work on portable thermal imagers for fire-fighting. He was the Royal Academy of Engineering Professor in Engineering Nanotechnology & Head of Advanced Materials at Cranfield University (1994-2005) and helped set-up IRISYS Ltd commercializing infra-red sensing in 1996. He was CEO of Tyndall National Institute in Cork, Ireland from 2006 to 2012. He is now a Principal Research Fellow at Imperial College London, Department of Materials and an Emeritus Professor at University College Cork. He is a Fellow of the Royal Academy of Engineering, Member of the Royal Irish Academy, a Fellow of the Irish Academy of Engineering, a Fellow of the Institute of Physics and a Fellow of the Institute of Materials, Minerals and Mining (IoM3). He was awarded the IoM3 Griffith Medal and Prize for excellence in materials science in 2003 and their Platinum Medal in 2019. He is a Senior Member of the IEEE, serving on FerroCom and was awarded the IEEE Ferroelectrics Recognition Award in 2019. He has published >320 papers & 40 patents in the field of ferroelectrics and their applications.